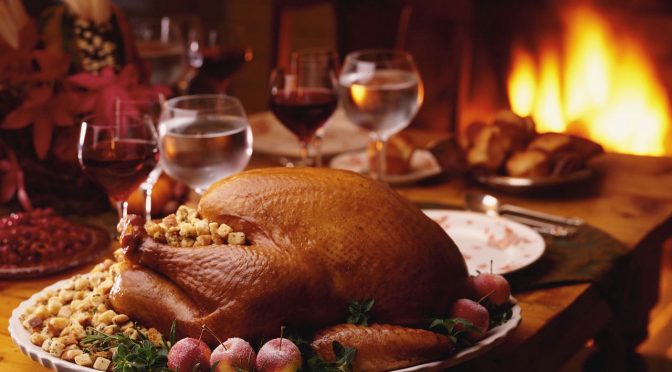 As usual, by the end of the meal we were all painfully uncomfortable. It had been a traditional Thanksgiving dinner for us: roast turkey, moist stuffing from the bird as well as baked from the oven for those who liked their stuffing crusty (me), mashed potatoes and gravy, baked ham on the side, raspberry jello salad, Ambrosia, sweet potatoes, assorted vegetables dishes no one particularly liked but by now felt obligated and mature enough to eat without coercion, hot rolls with fresh frozen strawberry jam, and wine, punch or coffee to wash it all down. Dessert, consisting of one’s choice from among Mom’s home-baked pies: apple, peach, mincemeat, or pumpkin, with or without homemade ice cream, would have to wait.

This year was special. It was the first year in many that my brothers and I, the four of us, along with wives, children and a sprinkling of grandchildren were able to be together for the holiday. Pop was pushing ninety and Mom was close behind. It was not an organized thing. I think each of us realized that there might not be many more opportunities, so, as fit the circumstances, we had apologized to aggrieved in-laws who thought it “their turn,” or set aside plans to “just be by ourselves this year”, and on Thanksgiving Day, we all converged on our childhood home along the banks of the North Fork of the Willamette River in Westfir, Oregon.

It is a small house: single story, three bedrooms, only 900 square feet. Growing up I never noticed it being small, but today, full of 30 or so adults and children, it was elbow to elbow. Fortunately, we all get along. We are a close family in a quiet sort of way. We don’t stay in touch much in between visits. We don’t go out of our way to get together. We don’t even keep up on each other’s kids, and we most certainly don’t write letters. We are at best, infrequent Christmas Card senders. But when we do get together, we really enjoy one another.

Table talk was always lively, often funny, and usually pretty loud. In the early years it would center around the latest hunting and fishing adventures, catching up on local events, or tossing gentle but targeted barbs back and forth regarding the upcoming Civil War game between the University of Oregon and Oregon State. Three had gone to Oregon State. I went to Oregon. And of course, there was always plenty of sparkling repartee regarding the national political scene. Now we don’t do politics. Same problem. Two went right. I went left. One just doesn’t care. It had gotten too serious and wasn’t worth ruining relationships.

Pop especially enjoyed the chatter. As always, he was the fisherman provocateur, throwing out the bait of a simple, calculated question and then waiting for one of us to rise and take it. Then off we would go. He wouldn’t participate. He just sat at the head of the table with a sly, devilish grin watching our combat. Meanwhile, Mom, from the opposite end, kept the food circulating, refilled glasses and cups, tended the grandchildren seated at the card table, and, upon occasion, issued the necessary reprimands to throttle back an overheating debate. It was, after all, her table, her house, her rules.

Mom had always been the strength behind the throne. She was the day to day caretaker for the four of us while Pop worked long 12 – hour days in the woods, usually leaving before daylight and often not coming home until after dark. She fed us, she nurtured us, she guided us and, when necessary she disciplined us. She was our daily presence and as with anyone that close, that constant, we soon took her for granted. She became the canvas upon which the rest of our lives were painted. And still, she was an enigma to us.

This day, the post-dinner conversation turned to the “old days.” Mom and Pop had moved to Westfir in 1936, shortly after they were married. We were curious about their life and the community in these early days. At first, we peppered them with questions such as: Where did you live? How did you shop? Was there a doctor available? What did you do in the evenings? Did you have a telephone? Was there electricity? What about hot water and a toilet? They patiently responded to all of our inquiries, occasionally pausing to glance at one another, silently sharing some old memory. “At first, we had lived in a tent in the old Ferrin Forest Camp down by the river. Later we lived in a rough slab cabin in Camp Three up on High Prairie and after that 10 miles on up the North Fork at Camp Five. Back then it was only accessible by the company railroad. After that, we moved down to company-owned housing in Westfir. We shopped at the company store. There was a local company doctor available but for births and anything serious you went to Eugene. No phone. At first no electricity. At Camp Three no indoor facilities. In the evenings we visited with friends and neighbors, we played board games and cards, and we read a lot.”

Soon enough the questions turned to even earlier times. Where did you go to high school? Were you a good student? Did you play football? Was grandma tough on you? How did you get along with your brothers and sisters? What did you do in the summer? What was your first job? We brothers wanted facts. Facts are easy. Facts are public. Facts are usually safe. The wives and granddaughters were more interested in relationships. Not so easy. Not so public, and not so safe. In those times of Jerry Springer salaciousness, bare skin, and paparazzi prurience, their questions seemed reasonable enough. But to Mom, they bordered on prying. Graciously but grudgingly she answered their questions on how she and Pop met, how they courted, and where they went for their honeymoon, but when “tell us about your first kiss” came up you could feel the room cool and time come to a stop. She glanced at Pop. He grinned at her. They remembered, and Mom, with her best Mona Lisa smile, turned and replied: “That’s none of your business.”

One thought on “Thanksgiving Primer”