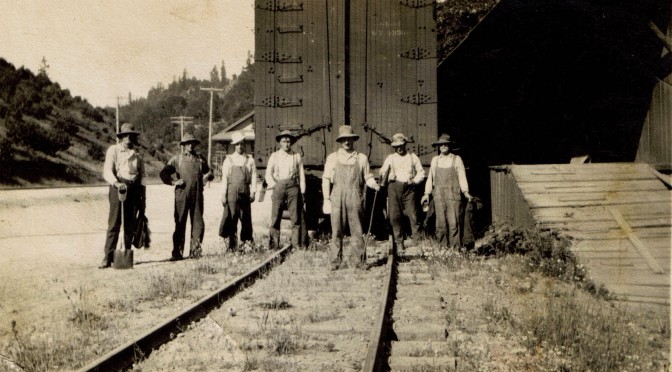 Its burnished now to a bright soft sheen
from years of wear on a denim jean.
Grandpa’s railroad working watch,
I keep it in a drawer.
The crystal’s loose,
the lace dried out
nothing special I suppose
but its all that I have left of him;
of the life he lived and the times therein.
Ah! the stories this watch could tell.

Of a young lad’s life in a Rhine river town
as a boy not yet sixteen
he was groomed to be an officer
and serve in the merchant marine.
On a steam driven ship on a teaching trip
he cruised the world round.
Of lying sick of a tropical germ
in a South American bed
and losing his hair, how it came back brown
when before it had been red.
Of arriving then in New York town
on the flood of a rising tide
final port ere going home
the last of a two year ride.
Ah! The stories this watch could tell

Of the choices faced by a teenage boy:
to go back home to the officer corp
and serve as a militant man;
then run the family’s business;
and play in the hometown band
or take the chance to find his way
in this large and beckoning land.
He left the ship and his family dear
put his feet on American sand.
Ah! The stories this watch could tell.

How he worked his way from east to west,
no one yet has told that tale,
and found his way to Oregon
to work on the iron rail.
Or of that day down in Myrtle Creek town
on the porch near the station door
how they chanced to meet, young Grace and he:
children, they had four.
Ah! The stories this watch could tell

Of the life they lived in their younger days
his work on the southern line
and of his later years in the timber towns
of the jobs in a sawmill grind.
How the city folk came out one night
at the start of World War One
to the “German’s” house on the edge of town
and took away his gun.
And how he died one day
of consumption they say
while working at the mill.
when no one on the job
even knew that he was ill.
Ah! The stories this watch could tell.

A quiet man, a reading man
didn’t have too much to say
to his children dear or his neighbors near
of his years in the German land
and of the tongues he knew
or the sails that flew
on the crest of a foreign sea
nor of the land he’d strode
or the rails he’d rode
on his way to the western lee.
Ah! the stories this watch could tell.

Now sometimes late in the evening
when embers slumber low
I can hold that watch
in the palm of my hand
and hear gandy dancer’s blow
of the hammer strike on the railroad spike
the sound of the wind through a sail
the accent voice of a polyglot crew
gathered round for a noontime pail
feel the wetting mist of a fog bound ship
hear the roar of a storm at sea
the laughter of worn out working men
sharing jokes at the end of a day.
Ah! The stories this watch could tell.
The stories this watch could tell.