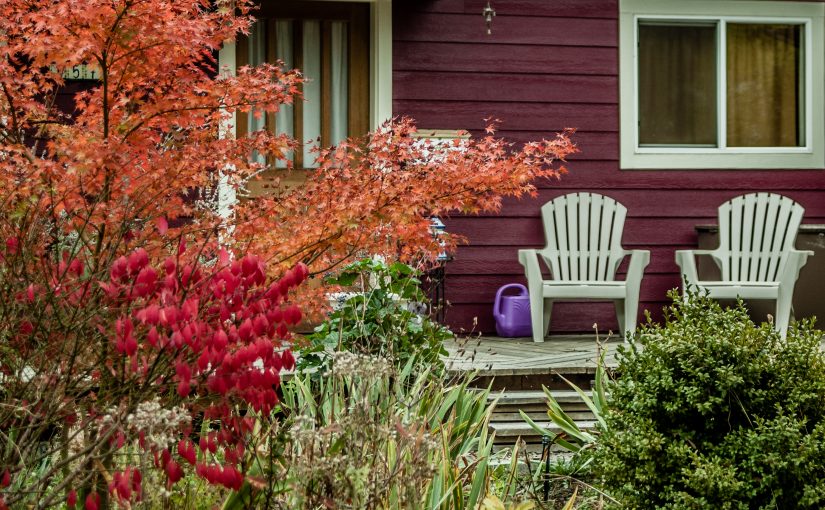 I’m on my way home from a long, hot, boring day at work. I turn off the main drag onto my quiet little street and conscientiously slow down to about 15 mph. It’s narrow and one-lane and full of kids and animals. Up the street a little yellow cat sees me coming and saunters out into the middle of the road and lays down, totally ignoring me. I creep forward figuring the cat will move. He doesn’t. I look to see if there is room to go around and just then two little girls dash out in front of me. I cram on the brakes while thoughts of “stupid kids” begin to bubble toward my lips. They chase the cat out of the street so I can go by then turn and smile and wave at me. It’s a pretty good neighborhood.

On a hot summer evening, the black lab across the street discovers a raccoon in the rhodies along the front of the house and begins yelping and barking and shrieking in the way that only dogs can shriek. The owners rush out into the darkness yelling, “Tie!” “Tie!” (His name is Tie) “Get back here!” “It’s a God damned raccoon!” Within five minutes all the neighbors have gathered on the sidewalk in front of their house with sticks and cudgels and lots of advice, all coming to their rescue. And nobody gets hurt, not the dog and not even the raccoon. Over the din of conversation I hear one of the owner’s say “I just love my neighborhood.” She pauses briefly, then asks, “Does anybody want a beer?” It’s a pretty good neighborhood.

Two of the ladies on our block annually take it upon themselves to see that everyone’s birthday gets remembered on time. One of them, a part-time nurse who lives across the street, is an aging eco-friendly flower child with a heart of green and gold. She told me the other day she is saving up to buy a Harley. The other is our neighborhood grandmother. On schedule, every year one or both surreptitiously go door to door to gather wishes and signatures on a birthday card we all sign. I used to wonder if they were competing to see who could get there with the best card first but then one day I heard one of them say about the other “she’s such a wonderful person…” and so I smiled and thought to myself, “It’s a pretty good neighborhood.”

Twice a year I want to throttle one of my neighbors down the street. It is, in the main, a quiet neighborhood — one of the things I like about it — but twice a year beginning three days before the 4th of July and again before New Year’s Eve he starts blowing things up. The conflagration gradually increases rising in crescendo until, on those special evenings and well into the following mornings, the street in front of his house becomes his own personal war zone. But then the next day I see him yell “Slow Down!” at some driver who decided to use our narrow little street as a high-speed shortcut around the stoplight out on the main drag. Then I realize: It’s a pretty good neighborhood.

A couple of years ago my neighbor Eddie brought home a young stray cat…named him Pumpkin…a young rowdy male. Silkie, his little black feline femme fatale, was not amused. About a year later she decided she’d had enough and moved in with Karen and me. Silkie and Miss Emily, my cat, get along just fine. Not wanting to be accused of cat-napping I spoke to Eddie. We tried to get Silkie to go home but a couple of months later Eddie came to my door and with a resigned shrug of his shoulders handed me a half full bag of cat food and said. “Here, you might as well have this.” Two weeks later Silkie moved back home. A month later Pumpkin moved in. It’s a pretty good neighborhood.

We like our regular postman. He’s polite and respectful. He knows who lives where and generally looks out for our mail and our yards. Occasionally we have a substitute who is not so respectful. He operates on “the shortest distance” principle and regularly cuts through yards and flower beds if that is the nearest to the next mailbox. We have complained but to no avail. My neighbor and I are currently scheming to place genetically altered postman eating rose trellises across his shortcuts. It’s a pretty good neighborhood.

Then there was the year someone stole Mike’s tricycle from across the street. Mike has a bum leg and uses his tricycle for exercise and short errands. Somebody suggested we take up a collection to help with its replacement and then someone else who knew someone who worked at a place where they built tricycles offered to see what could be done and a month later we presented Mike with a new, fully paid for, custom built, top of the line, red tricycle. It’s a pretty good neighborhood.

Someone bought Tom’s house the other day. Tom died last year. In practice, he was a Master Gardener and a tile worker, but at heart, he was an artist and his home reflected it. It was a singularly unique place and those of us who loved him came to love his home too in spite of the reek of stale smoke. His bathroom and bedroom were fine works of tile art. Now the new owners appear to be redoing the interior and hauling most of Tom’s work off to the dump. It feels like someone criticizing a family member but I guess every dog needs to pee in the corner of his new digs. In the end, it will be fine. We’re a forgiving lot and it’s a pretty good neighborhood.

Nobody famous lives here. But then nobody infamous lives here either. Lots of people have pets. It is not surprising when you see moms and dads and kids and dogs and cats all out for a walk together although the cats seldom use the sidewalk preferring instead to slink alongside through the nearby bushes. We all know the names of the dogs and cats but probably not those of all their owners. We look out for one another when the need arises otherwise we pretty much leave one another alone to lead our lives as we see fit. Occasionally even deer from the hillside wander down to walk our sidewalks. It’s a pretty good neighborhood.