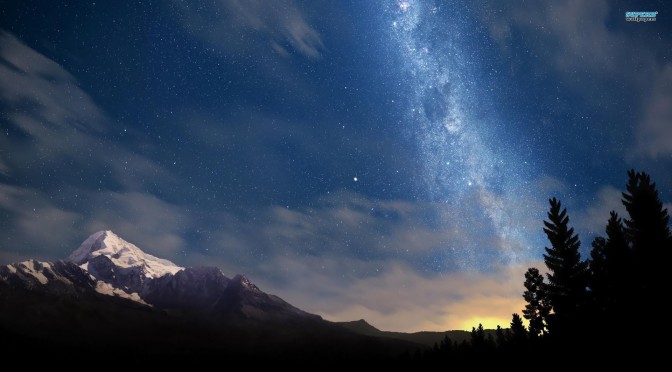 He huddled closer to the small fire and gathered the corners of the tattered down sleeping bag more closely around him as he stared into the small flame, deep in thought, ignoring the wafts of smoke that stung his eyes whenever the wind swirled his way. It would be evening soon and it would be cold again, colder than last night and colder than the night before. Beside him the once high stack of firewood had dwindled to a few small branches. He could hear the crack of a tree up near the timberline as its frozen trunk snapped in the bitter late autumn wind that crested over the peaks behind.

He wasn’t a young man anymore. With each passing year it had become more difficult to survive the long winters. His sight was beginning to dim and what he used to do with ease was now a struggle. His reaction time had slowed and after every serious exertion his body would ache for days.

He was remembering. In his mind he spooled backward to those early days before the disparate threads had yet to weave themselves into the carpet that would become his life, the life that had brought him to this time, to this place and to this moment. Back before the unwinding.

It had all seemed so safe back then, fresh from university with his hard fought MBA in his hand and Evelyn, sweet, adoring Evelyn by his side, clutching his arm, the two of them ready to take on the world. And it had been good for a few years. A solid job, a house in the suburbs, the birth of Dean and Randal, their lives unfolding just as they planned. But then the crash came. It was supposed to have been a mild recession. That’s what the experts explained. Just a normal, cyclical correction in the economy. It had happened before. It would happen again. Just hang on to your job and cut back on your spending. Wait it out. That’s what they had advised. But it hadn’t cycled. It had crashed, first the stock market, then the banks, then the businesses. Panic set in. Families began stockpiling supplies. Gun stores were ransacked. Grocery stores were emptied. Mobs formed. Shots fired. The social order crumbled like a house of cards and within six months their once friendly suburb had become an armed, barricaded camp open only to those who belonged there.

From there their life played out like some post apocalyptic science fiction novel. He had grown up on a small farm where he had learned basic gardening and had hunted and fished to pass the time as a teen so within the year he moved them from their suburban home back to the family farm believing they would be safer there away from the violence and fear.

And it had worked. They had raised the boys successfully. For over twenty years they grew what they could and hunted and fished for the rest. Always vigilant. Always prepared.

After that he began to wander. He traveled up and down the valley living off the land, avoiding what few people he came across and slowing outside of towns and cities to observe them from hidden places. He wanted nothing to do with people. Part of him was still crazy from the grief and he blamed everyone. But part of him was sane as well and that part was curious to know what was happening around him. So he watched and made mental notes. After a time his wanderings became a route, a circuit that he completed twice a year, every year. Every village had been swept by the pestilence and in each a few residents, like him, had survived somehow. He counted them as best he could with each passing and noted the changes. Each year there were fewer and fewer people. They were dying off. He realized with a shock one day that he had not seen any young children since the pestilence had swept through. There were no children being born. Something about the disease must have sterilized even those who had survived.

That had been over thirty years ago and it had been over ten years since he had last seen any living person at all. The last time he had hiked his circuit the villages were empty. So far as he could tell, he was alone.

And now, sitting by the fire, wandering back over the twists and turns of his life, he knew that he would not go back down the mountain to the warmer lowlands again. He had neither the strength nor the interest. By any standards he was old and he was dying. He knew that this would be his last night. He would not see the light of day. He wondered if he should write something down. Perhaps he should try to explain how it had all happened. But for whom? Who would read it? As far as he could tell, he was the last. There were no others. This was it. The race was run. It was done.

He placed the few remaining branches on the fire then stretched out along side it, pulled the sleeping bag tightly around him and closed his eyes.

A tree high up near the crest of the mountain buckled under the force of the wind and toppled in a slow graceful arc like the second hand on an old watch to settle onto the forest floor.

One thought on “The Unwinding”