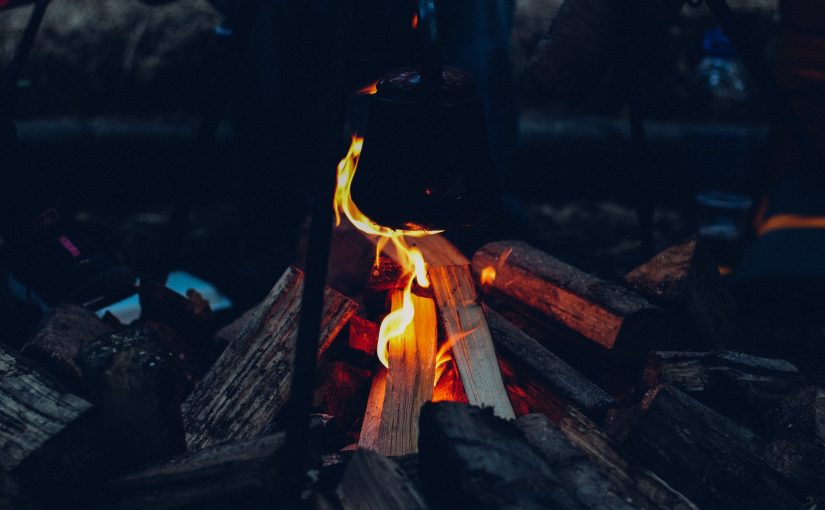 I don’t know when it first began, this power that an open fire has over me, but it came fully into my awareness on a camping trip shortly after I returned home from South Viet Nam.

It was no different than many other camping trips my friends and I had made as teenagers. My father dropped us off at the trailhead and we hiked four hours into the high mountain lake we planned on fishing for the next few days. The routine was pretty much the same: hump our packs into the lake, get some fishing done in the afternoon, and then, before it got too dark, set up camp for the night. Setting up camp entailed finding a relatively flat, stone-free space on which to roll out a sleeping bag, gathering enough wood for the evening, and starting a fire. In those days we didn’t need to buy permits or pay camping fees and we didn’t carry tents, air mattresses or foam pads. We just slept on the ground as we found it. As I recall, the ground was much softer then.

Dinner was trout cooked over the fire. If we hadn’t caught fish then, just in case, someone always brought along hot dogs. Roasted marshmallows were desert and after that Kool-aid, soft drinks or beer as we settled in around the fire.

Twilight in the high mountains is a special time. It is what, I am told,  the First People, call “the time between dogs and wolves,” that time between late afternoon and the fullness of night when the evening cool begins to settle in, mosquitoes return for a final assault, night sounds stir the air and shadows from the surrounding forest begin to consolidate into a wall of darkness.

Early on, when the flames were tall and the fire young and crackling, sending its embers high into the night sky as though they could join the stars overhead, the story telling began. Yarns were spun, old favorites embellished, recent escapades shared and local gossip dissected.

It was a time of boisterous hilarity, gentle joshing, and warm camaraderie; a time free from the daily pressures and obligations of the “real world.” And as the evening wore on, we huddled closer in around the fire trying to find that right spot, that balance point between the heat from the fire and the fresh, cool night air at our back, that delicate place between too hot and too cold, too many mosquitoes or too much smoke in our lungs.

“Smoke follows beauty.” One of us would predictably mutter as we finally gave up our place to move to the opposite side of the fire, inevitably to be followed by the smoke as the night breeze changed its direction as though to accompany us.

At some point in the evening I could feel the fire begin to assert its magic, to take control. Boisterous chatter softened into quieter conversations increasingly interspersed with periods of such silence that I could have heard a conversation from across the lake. Later the flames shortened their reach and the coals took on a rich, red, mesmerizing glow. Slowly, slowly the fire drew us in until the occasional crackling of an ember was all that broke the stillness. We sat, each of us, staring at the glowing coals as we drifted into a reverie of memories and dreams, of places that never were, of wrongs set right, of sights never seen, of loves undone and of futures yet to come. Further and further I drifted into a timeless, ageless place. At some deep level I lost my sense as a separate self and joined with those who had come before, with all the souls throughout history who had sat around a fire deep into the night, and wondered and dreamt, each in his own reverie with his own connection to this unconscious, collective stream of humanity throughout all of time.

I woke to the immediacy of a frosty, high mountain morning. The fire was out, the ashes cool and silver matching the frost on the surrounding grass. Sometime during the night I had found my way to my sleeping roll but I did not recall how or when. Traditionally the first one out of their sleeping bag starts the morning fire so I gathered a few twigs and chips and knelt before last night’s ashes, blowing gently, hoping that one slight ember still remained to be rekindled.

As I sat waiting for the others to stir, holding my cold fingers out over the growing flames, I tried to remember the details of last night but I could not. I knew that I was different in some small way, that something within me had changed and that I had both found and lost something last night. I could not tell exactly what it was I had lost or found, but I knew that it had something to do with the wilderness around me, the “real world” I lived in, and the night-time fire.